A fresh coat of paint can score many positive outcomes: brightening the look of a bedroom, changing the feel of a living room, and reviving the appeal of a house.

But sometimes the value of a new paint job runs much deeper than one can see on the surface.

What began with a family's pleas for assistance at a Titusville City Council meeting ended with a community service project a caring group of Viper student athletes will not soon forget.

In addition to being a Space Coast social students teacher, Mr. Matt Barringer is a business owner and a Titusville City Councilman. During a recent city council meeting, his heart went out to a homeowner of 45 years, Mr. Walker, who asked the council for assistance with painting his house. On an already stretched budget, the city council was unable to spare the funds to fulfill the request.


However, Mr. Barringer was determined to find a way to fulfill the family's request for help. "It was a team effort. We linked up with Aging Matters, which helps seniors in Brevard county. They came out and pressure washed the house to prep for the project. My office paid for the paint. Then Coach (Michael) Pommier's team came to do the painting."

Austin Rodeghier, a senior, is the Captain of the varsity boys basketball team. "Coach Pommier told us doing this would help change someone's life. He was right."

"I kept stressing how important it is to think outside of your own life, and to think about how you can help others," said Coach Pommier. "I tell them our basketball program is about being a part of something bigger than yourself. The team seemed to buy into that concept."

The players arrived early in the morning prepared to do what it takes to see the project through. The project required six hours of difficult labor on a Saturday but the players fit in plenty of laughs along the way—the house wasn't the only thing that got painted. "It was a really funny day," said Austin. "We ended up painting each other and having a good ol' time."


When the painting was done, Austin presented the homeowner, Mr. Walker, with a picture of the team and a Vipers Basketball T-shirt. "Even if Mr. Walker hadn't said anything, you could just tell by his expression how much he appreciated having us come here and help out."

"Mr. Walker said he used to love to play basketball when he was as kid," said Austin. "He played point guard, which is the same position I play, so it was pretty cool we had something in common. He also said he could relate to what we were doing because when he played on a team, they used to do things outside of basketball to bond as a team."

"Mr. Walker's family came up at the end and they were all up in tears and really grateful for everything," said Coach Pommier.

Austin said, "I thanked Mr. Walker for letting us come here and help paint his house and he said, 'Thank you much!' and asked if he could get a photo of all of us together in front of the house. So we took the picture."


"Our team has a group text," said Austin. "We were all talking about how cool it was to do something off the basketball court to help someone in need."

"It's always nice to help people," said Briggs Kline, a sophomore. "In my church, there is a big focus on giving back to others. It's great to give back and not to get anything back in return. It gives you a great feeling in your heart."

"It felt awesome," said Darryl Davis, a junior. "We worked together as a unit to complete a project and to help out a family."

The two Space Coast employees responsible for bringing the painting project to fruition deflected credit to each other.

"Mr. Barringer is the one who spearheaded it," said Coach Pommier.

"Coach Pommier was the driving force on this one," said Mr. Barringer. "He was committed to doing a community service project with the students."

Clearly, what mattered was not who got the credit but that the family in need got the help it deserved.

"The best part was helping a family in need," said Coach Pommier.

"It was one of those where you take something that didn't work out and it worked out beautifully," said Mr. Barringer.

With acts of kindness, the givers often walk away with as much benefit as the receivers. "I think this experience has changed us," said Austin. "It helped us put aside our differences. It changes how we look at things outside of basketball, and makes us think about what we can do off the court to help other people." 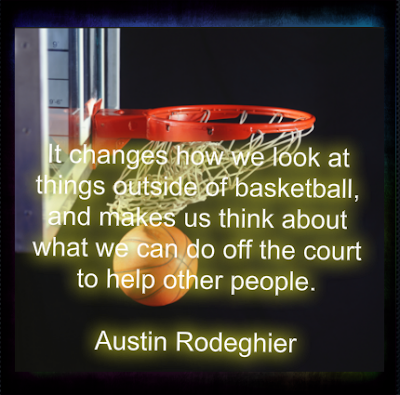 "It puts things into perspective," said Coach Pommier. "You get to see kids coming out of their shell and being a different kind of leader than they are on the court."

Slam dunking a lesson on the value of helping others, long before the paint dried, members of the Vipers boys basketball team had already gained a fresh new perspective on life.

Stay current with Space Coast Jr./Sr. High at Space Coast Edline.
Posted by Unknown at 7:11 AM