"The time is always right to do what is right" still rings as true today as it did when MLK, Jr., first spoke these words during a commencement speech several years before his death.

In business and in life, knowing what is right does not always translate into the right actions being taken, yet engaging students in discussions and analysis of ethics in practice can help them internalize the importance of consistently making that critical translation.

With such a vigorous belief in doing the right thing, MLK, Jr., would have undoubtedly enjoyed being a part of FIT's 20th Annual High School Business Ethics and Leadership Competition, an event sponsored by Community Credit Union and FIT.

Participating students from the Space Coast High School Ethics Team gained a deeper understanding of how the seemingly simple concept of 'doing the right thing' can easily be compromised in an often complex, profit-driven real world. 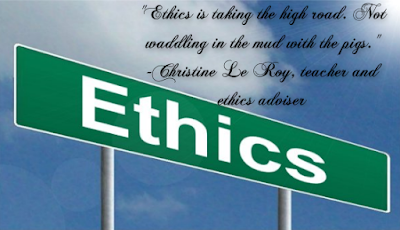 At the ethics competition, students were given a real international case study from Harvard Law School on business ethics, and tasked with analyzing the case to identify an ethical problem and then come up with the best solution to solve the ethical dilemma.

"We were challenged to maintain a business mindset, and to consider the country's ethics in comparison to America's ethics, because there are distinct and important differences," said Brandon Devoll, a senior.

The case involved an ethical situation faced by Novo Nordisk, a multi-billion dollar pharmaceutical company based in Denmark.


"We had to look closely at the off-shore clinical trials the company was performing," said Sara Flanigan, a junior. "We had to ask ourselves whether the trials were being conducted in an ethical manner."

C.S. Lewis viewed integrity as doing the right thing when no one else was looking. Certainly, disappointing choices can sometimes be made when the world has their back turned.

"In 2008, Novo Nordisk only audited about 10% of their off-shore clinical trials. The FDA and the EMEA (which is the equivalent of our FDA for European countries) only performed random audits on about 1% of those trials, so there is room for error and controversy," said Brandon.

However, in the world of ethics, accusations of any wrongdoing should not be unfairly assumed.

"To use a common phrase, we had to approach Novo Nordisk as if they were innocent until proven guilty," said Sara. "We had to give them the benefit of the doubt."

"Our job was to defend the company," said Laura Sharpe, a sophomore. "If we found they were not operating in an ethical way, we had to make sure we were proposing solutions which would solve the problems."

Thanks to their critical thinking, outstanding contributions, and unrelenting commitment to doing the right thing, Brandon, Sara, and Laura were each awarded $48,000 in FIT scholarship money. They also earned cash awards of $125 each for their 3rd place finish in the competition.


Participants also received plenty of feedback from a judging panel which included high profile professionals with vast experience in the international business realm.

"The judges praised how well we worked together as a team," said Sara.

"We quoted the Helsinki Declaration, which is the international code of ethics that Novo Nordisk claims to use," said Laura. "We used it as our support, and the judges really liked that approach."

"The judges liked how we stood our ground," said Brandon. "They gave us a lot of scenarios to try to get us to delineate from our solution, and we stuck to it and provided support for our solution."

The competition was an experience these students will not soon forget.

"All of the teams were so nice and even though we were competing against each other, we were all very supportive of one another," said Sara.

"It felt great to set a new standard for our school," said Brandon.

"I felt very accomplished," said Laura. "You don't want to just do it for the money. You want to do it something that you're passionate about."

"You learn so much and make a lot of connections," said Sara. "In my other classes, I was beginning to see things like from a different perspective, like how tobacco companies hold back information about their product, and how unethical that is."

"Being on the Ethics Team helps you analyze issues in the real world," said Laura. "It also deals with thinking about solutions once a problem has been identified."

"It gave me a more realistic viewpoint of things and helped me understand better why the world is the way it is," said Brandon. "If you are a business owner and you want to keep your business alive, you also have to keep in mind what is in the best interests of your customers from an ethical standpoint. If you want to build and keep a good reputation, you have to do what is right for the people." 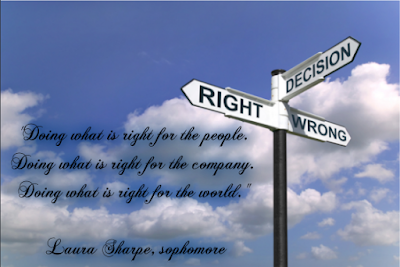 "The business ethics portion of this is about doing what's right for all stakeholders, whether they are directly or indirectly involved with the company's decision-making," said Sara.

"Blew it out of the water!" Sara chipped in.

"Yes, blew it out of the water," added Mrs. Le Roy after sharing a laugh with her students.

"I also learned a lot about how to coach students at this level of academic achievement," she continued. "By asking a lot of higher level questions and employing a lot of Socratic Method, it enabled me to be a better coach for my students."

The Ethics Team is open to all high school students. "In September, we're going to start a new team and get ready for anyone who is interested in joining the Ethics Team and competing next year," said Mrs. Le Roy.

What do prospective students have to gain by joining?

"A different viewpoint of the world," said Brandon. "You hone in on your critical thinking skills and your research techniques."

"Knowledge and insight in a lot of important things going on in the world," said Laura.

"You learn that hard work pays off, even if you feel like you're getting nowhere," said Sara. "You also develop skills as a team player."

Brandon agrees. "Teamwork is a fundamental aspect, and a key to competing successfully."

"You walk away with self-actualization of accomplishment," said Mrs. Le Roy. "You're reflecting back at what you accomplished and saying to yourself, 'Yeah, I did that, and I'm proud of it, and I'm better for it."

The Ethics Team's takeaways from the competition prove whether anyone is watching, Mrs. Le Roy has fully prepared her students to do what is right—every time.

To read more about the nature of the event, visit FIT's Newsroom.

Stay current with Space Coast Jr./Sr. High at Space Coast Edline.
Posted by Unknown at 6:56 AM