The mission of Brevard Public Schools is to serve every student with excellence as the standard, and the accomplishment of that mission has resulted in graduating senior Jonathan Guarine receiving the Congressional Medal of Merit.

"My guidance counselor, Mrs. LeChien, told me about the nomination," said Jonathan. "At that point, I had heard a lot about Congressman Posey but I had never met him before. When I received official notice I had won the award, I was thrilled. It was a congressional award, so me loving politics and government, I found that to be amazing. It showed that my hard work paid off."

It was also a special moment in time for Jonathan's family. "My family was very proud of me," he said. "They were excited about where an award like this would take me, and what doors it could possibly open for my future." 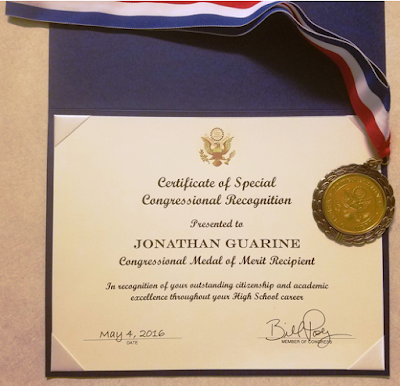 "The award ceremony was held in the Brevard County Commission Chambers. (Assistant Principal) Mr. Waller, my father, and my best friend Amber all came and supported me."

Jonathan continued, "As they were calling up the recipients from other high schools, I found myself feeling humbled because their accomplishments were so much more extensive and it just showed the incredible level of talent, intelligence, and determination of others in the room. I felt fortunate to be in their company."

"When they called me up, I shook hands with Congressman Posey as they listed off my accomplishments that led to the award. He congratulated me and wished me luck with my future."


Jonathan's achievement did not happen by accident; it was a result of many years of concerted effort. Upon entering 7th grade, he enrolled in the Viper Accelerated Program (VAP), which was designed for gifted and high-achieving students who are eager to take their education to the highest possible level through engaging in fast-paced, rigorous coursework.

"The first year was so different than elementary school. As a student, you had a lot more choices and more options, inside and outside the classroom. I like how much opportunity Space Coast has for extracurricular activities. I was able to get involved in Student Government and Model Student Senate, as well as tennis."

"At first, it was different being with the same people all day long, but we quickly bonded as a group. We helped each other out on assignments. We hung out outside of school on the weekends. We went to a lot of fun field trips together. We've gone to EPCOT, Medieval Times, FIT's Laser Day, Julius Caesar at the Shakespeare Theatre in Orlando, and Universal Studios. The field trips gave us a chance to grow as a group, as well as learn more about the subject matter we were learning in school."

Some of the most impressionable VAP teachers Jonathan had during his time in the program were Mrs. Martine, Mrs. Petronella, and Mrs. Hanson. As he reflects back on the positive impact each of these teachers had on his life, great memories abound.

"I've grown close with Mrs. Petronella and her classes," said Jonathan. "In 11th grade, I started interning for Mrs. Petronella. I helped create assignments, gathered materials, and did whatever was necessary to support classroom learning. I like it that I can see learning from a different perspective, from a place that I was just a few years ago. Mrs. Petronella is the most caring teacher I've ever had. She's like my second Mom." 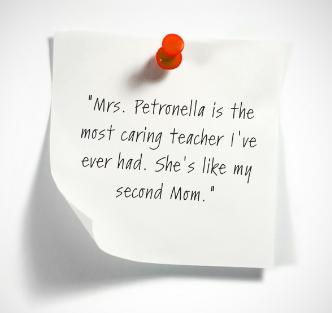 "Mrs. Martine was the first teacher to make me cry because she gave me an F on an assignment in 7th grade," Jonathan said. "I remember it vividly. It was petrifying. My heart dropped. I thought, 'This lady is wicked!' But after a few weeks, I came to love Mrs. Martine, and we laugh about it now. Mrs. Martine is the most supportive teacher I've ever had. She's pushed me to apply for Ivy League schools and to reach for the stars."

Jonathan's teachers reciprocate the deep respect he feels for them. "Jonathan is an overall wonderful person," said Mrs. Petronella. "He's not only a smart individual, he's a good person. He's going to be massively successful in life."

In addition to having strong, supportive teachers, Jonathan correlates his passion for education as a tribute to the sacrifices his family made to afford him his current opportunities.

"It's an individual thing where I really push myself," he said. "I feel like I have something to fulfill. My family came from Vietnam, so they didn't have the chance to get an education. That's one of the biggest reasons why I'm so motivated, because my grandparents weren't able to get an education. My parents did, and they took it very seriously. So do I."


Advice for young students? "Don't get in the habit of thinking short-term," said Jonathan. "Start thinking about where you want to go in the future, and how you can start preparing for that now."

Sporting a perfect 4.0 unweighted GPA and a mind-boggling 4.52 weighted GPA, Jonathan received strong consideration from Ivy League schools, including being selected for Harvard's waiting list, but since May 1st was the national deadline for submitting enrollment fees, he decided to commit to FSU.

"I am going to be studying political science while gaining internship experience at the State Capitol," said Jonathan. "Going to college is an opportunity to get immersed into the real world and to make decisions that have bearing over the future. I like meeting more people from around the world, and to gain more perspective.  I'm excited and anxious about getting that chance."

How does Jonathan feel about leaving the school he has called home for the last six years? "I'm going to miss Space Coast, especially all of the teachers and faculty I've grown close to and who have helped me every step of the way."

"After college, I'd like to get involved in public service. Maybe run for office. I like helping others in the ways that they can't really help themselves. Taking the things in society that are in need of help and changing it so the next generation can benefit. That's what I think about."

Anyone who knows him would agree: Jonathan Guarine exemplifies the congressional heights of success that can be reached when excellence is the standard.